As soon as the leaves change color in autumn comes the perennial question at the co-op: When will the Featherstone carrots be here?

If you’re not familiar with Featherstone, you might wonder why this question is even asked. A carrot is a carrot, right? Well … not always! When it comes to carrots, there is something about Featherstone’s locally grown, organic carrots that makes them different. They’re crisper. Fresh. Sweeter.

Jack Hedin of Featherstone says there are three main reasons their carrots are different: the soil, the carrot variety, and how his team harvests. 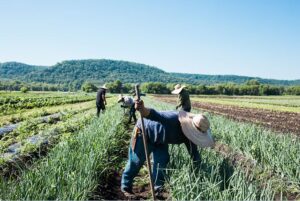 The main reason for Featherstone organic carrots’ outstanding flavor? The soil in which they’re grown. When Jack first started farming, he couldn’t even grow carrots — the soil had poor drainage and other challenges. But when Featherstone moved to their current farm location, they were thrilled to discover they had the right soil conditions for carrots.

“We have a one-in-a-million field,” says Jack. “There’s 8 feet of well-drained black dirt silt, with sand beneath it to absorb superfluous moisture. We have risk management for both wet and dry years in the same field, that’s the magic for carrots. They need a great deal of organic matter in the soil to produce the flavor profile. [Plus] we do micro-amending with field-specific trace minerals to achieve micro-chemical balance.”

Another thing that makes Featherstone organic carrots different is the variety. Most carrots you find at grocers are Imperator carrots, which are long, skinny, and good for long-term storage. Most large-scale farms in Minnesota grow that variety, which does better in muck soil. But Featherstone grows Bolero carrots, which is a Nantes variety grown for fresh eating. This variety emphasizes flavor and crispness over storability.

Harvesting at the perfect time 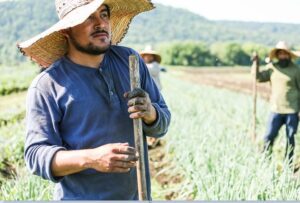 The third thing that makes Featherstone carrots sweet is the timing of the harvest. Jack saw this firsthand back when he was new to farming. He and his wife would wrap up the fall harvest in Minnesota and head to Sacramento to work on farms there. Comparing fall kale, carrots, and greens, which in Minnesota had been exposed to freezing temperatures, to the same crops grown only warm temperatures, Jack says, “The California produce would be tasteless, straight up. They wouldn’t have the natural sweetness and flavor. … Plants react to the cold as self-preservation and produce antifreeze, which is sugar.”

Since then, he’s worked to perfect when his team harvests his carrots. When you get a few light frosts, carrots begin to sweeten. But if you wait too long, or if conditions get wet, things go downhill quickly.

“The rich organic soil that gives the flavor is also a real enemy of efficient harvest when it’s wet because of the mud,” says Jack. “We try to delay and harvest as close to the freeze out as we can [but] in the past we’ve gotten badly burned. In a wet fall we can bring in a lot of mud, and the cleaning effort during that type of winter is a nightmare. One year out of three or four is really hard. And that’s why nobody [else] does it.” 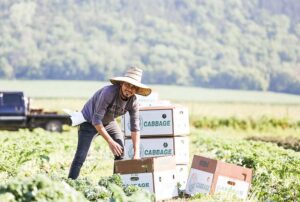 Featherstone farm is committed to farming following organic practices, and they took the extra step to obtain certification from the Real Organic Project. “We’re trying to learn from and mimic the natural systems of soil fertility, natural pest control, creating biodiversity on the farm, instead of tamping down biodiversity through sprays and things,” says Jack. “It’s the idea of building up microbiology and microchemistry instead of reducing it for the short-term needs of a crop.”

Jack says that the Real Organic Project is an important distinction. He maintains that organic certification is the “absence of stuff that’s bad.” But the ROP indicates more. “[It’s] the presence of good, active, building up, encouraging of biodiversity and soil health … it’s soil-based, organic, good-for-the-environment overall, which is where I’m at with it. I’ve never considered doing anything different.”