The Twin Cities food scene is vibrant and storied — a showcase of diverse traditions and food ways, as well as tasty local ingredients. Chef Austin Bartold brings his care for community and respect for the food system to every dish he creates. He highlights local ingredients at their peak season in a way that merges his classical training as a chef with his Anishinaabe and Oneida heritage.

Chef Austin developed a passion for cooking for his family and community at a young age. He continues to cook with the health benefits and flavors he began growing back then as a base for the meals he artfully crafts. We caught up with Austin to find out what motivates and inspires him.

Cooking with Passion and Nurturing Community

Lakewinds: Tell us about your culinary background. Why did you become a chef and what inspires you?

Austin: The reason why I started actually going into this career and having this passion was because I grew up on the reservation and [many people in] my family has diabetes so I was watching them poke themselves and taking them to dialysis. I started learning at a young age how to cook potatoes. You have to rinse them really well to get the starch off so it doesn’t raise their blood sugar. Maybe 8 or 9 years old is when I started cooking for my grandma. We grew up with the [food shelf] system and that was what the government gave us, canned goods and whatever, you just showed up to the store and got your rations for the month. In the winter that’s pretty much what we always did, but in the summer we had our own gardens. … So I told myself when I was going through school and went to college on the reservation that I was going to go to culinary school and learn more so I could go back home and teach. I’ve always wanted to open up classes to teach individuals about food and how to eat healthier. If I cannot make it back home to teach my own community I want to do it here, and I’ve been here [in the Twin Cities] for 20 years now. … Basically, the reason I do it is for my relatives whether they’ve passed on or they’re still living here. It doesn’t matter what tribe you come from. Just to let people know we’re still alive, that we know how to do certain things.

I also need to thank a lot of the chefs that I’ve worked under that showed me to think outside the box, and all the chefs who had faith in me or gave me an opportunity to prove myself. But in the back of my head it’s always my family. 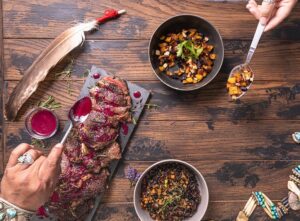 L: Thanks for sharing your recipe for bison ribeye steaks with us. Why did you choose to use bison?

A: On my reservation, we don’t have buffalo. We grew up with deer and randomly a moose, but I never had bison until I came up to the cities and that was in 2007 or 2008. That was the first time I had buffalo, and that was around the time I first worked with Eichten’s. That’s been 14 or 15 years since I’ve known Ed Eichten. So it was new to me [back then] to learn how to cook the bison. From roasts to steaks to burgers, it was really something different. Now people are starting to go for buffalo over beef because it’s leaner meat and it’s not as gamey [as some other meats].

L: What are your tips for folks who are interested in bison, but might not know how to cook it?

A: First of all, marinate your bison in oil with things like rosemary, thyme, I always do a pinch of cinnamon, garlic, and some salt and pepper. What’s going to happen is because bison is so lean, it’s going to absorb all those flavors by the time you put it in your cast iron or on the grill or however you want to cook it. For medium rare you’re going to sear your ribeye for about 3 minutes and then flip it over and let it go for another 3 to 4 minutes. Turn the heat off and let it rest in the pan so it keeps absorbing the juices. For burgers, you don’t want to smash the burger at all. … It’s so lean already that if you [press down] while it’s cooking, you’re going to have dry meat. …That means it might take a bit longer to cook [if you’re used to smashing your burgers.] You should only flip it once so you don’t lose the juices. I make my bison patties with herbs and things so it’s almost like a meatloaf.

L: Indigenous food has been getting some recognition lately. How can people best support that?

A: First, you need to meet an Indigenous individual, a Native person. This [food] is not new. I’m so thankful I’m in this lifetime right now because back in the ’40s or the ’50s we were not even accepted. And we’re still fighting for this stuff. And so now that people are recognizing that yes we are people here. Like people across the seas know more about us than people here know about us, and there’s 577 tribes in the United States, but not all are federally recognized. …  Each tribe has a different way of their language, their cooking style, their dialect, their laughter, and even skin tone. … And so the one thing that I would say is do some research first. If you’re curious about Native food or culture you’ve really got to do some research because we didn’t have it easy. … The way I say too, for instance, is if you go to a Mexican restaurant or a Thai restaurant you’re going to see a lot of the same. If you go to a Native restaurant you’re sitting there like “what is this?” and then you want to get the ambiance of food but you don’t know what it is or where it comes from. Basically, I always try to get as local as possible. Just having the thought of where do my ramps [and other ingredients] come from? … I think people need to do a little research to learn that a lot of the ingredients that we have here have been here. We were no chefs back in the day, we just cooked for our family and made sure there was, you know, food on the table, a roof over your head so-to-speak, and everyone is safe. People ask me how do you say “chef” in Ojibwe and you don’t really. They just call me a man that cooks; there’s no hierarchy or anything.

L: Where can people find you? How can they find your food?

A: I’m on Facebook and I’ve got a recipe in Original Local: Indigenous Foods, Stories, and Recipes from the Upper Midwest by Heid E. Erdrich, which you can get at Birch Bark Books. People can always email me directly or contact me on Facebook for catering info or if you have questions or other requests. I do consulting work and cooking lessons too. My email is BartoldAustin@gmail.com.

A: I think one thing is, again, do research and know what’s in season. … Don’t take for granted your food in front of you. And when you buy food, buy it ration-able. Buy only the amount of servings you need. Think about it and utilize [food] consciously.

Chef Bartold currently has a catering business, consults, and does cooking demonstrations. He enjoys opportunities to educate about the importance of local ingredients and using techniques that prioritize sustainability, health, and respect for the planet in addition to fantastic depth of flavor. He previously served as a chef and nutritionist for the Division of Indian Work, and as a chef at Gatherings Café and at Pillsbury United Communities. He’s featured in Original Local: Indigenous Foods, Stories, and Recipes from the Upper Midwest by Heid E. Erdrich, which is available at Lakewinds seasonally. Find his recipes for Bison ribeye steaks with beet drizzle, roasted root veggies, and wild rice pilaf. Watch Chef Austin’s cooking demo for Walleye Cakes with Pineapple Slaw & Wild Rice Salad and grab the recipe here.