It’s a very exciting time for all of us at Lakewinds, with exclusive access to pasture-raised pork from TC Farm. Personally, when I hear the words grass-fed or pasture-raised, my first thoughts jump to the ethics — raising animals in a compassionate way, having the golden ticket to roam free, as well as the positive environmental impact.

But there’s more to the story. When I decided to convert to eating only grass-fed/pasture-raised meat, the health benefits were actually the biggest surprise to me. I assumed that meat was meat in terms of nutrition: through protein, vitamins, and as a fat source. But I quickly learned that when left to be their natural omnivore selves, (pigs eat a little bit of everything, not just grass) pasture raised pork is a homerun for our bodies, compared to those raised on factory farms.

Before we get into the health, it’s important to know that TC Farm raises only heritage breed pigs, which are slow-growing and selected for their deep flavors and excellent health. Think of them as an heirloom tomato, or squash, providing biodiversity, as well as older blood lines. The pigs are never treated with synthetic hormones or given GMO containing grains. In fact, when supplemental feed is needed, the pigs are given organic grain feed (no soy or corn), and often Jack buys from farmers transitioning to organic to help them support their path. The animals are never stressed, and allowed to a happy life in the field. This bounty also promotes healthier litters and shorter farrowing times. 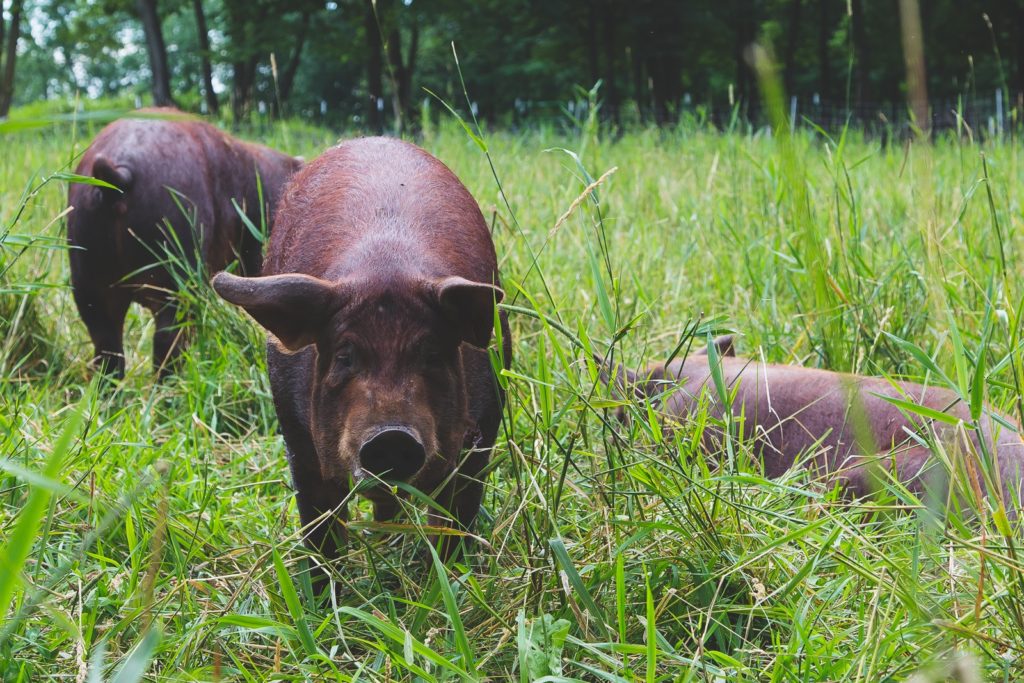 1. High Quality Fats: pastured pork has a significantly better ratio of Omega-3 to Omega-6 fatty-acids comparted to factory farm raised. Green grass and leaves are major sources of Omega-3 fats, which is what the animals at TC Farm thrive on. A large portion comes right from their diet, which on the pastures means anything they can get their snouts into: roots, grass, leaves, grubs, nuts, fruit, and insects. Compare that with the typical diet for factory-farmed pigs, which is largely based on corn and soybean meal.

2. Vitamin Difference: The high quality lard from pastured pigs also contains high amounts of vitamin D (which many Americans are deficient in) & vitamin A, while conventional pigs contain minimal amounts. This is one of the reasons Jack suggests taking the extra fat from any of the cuts, braising it down in the oven to reduce and using it in a delicious confit like this.

3. Antioxidants: Pasture raised pigs have 74% more selenium than pigs raised on factory farms. Selenium needs Vitamin E to work as antioxidant, which makes pork such an amazing food since it has both. Antioxidants like selenium help fight damaging particles in the body known as free radicals. Selenium plays a role in thyroid function, specifically related to the immune system as well.

My hope is that by knowing some of the great things pasture-raised pork does for our body, it can be another benefit when thinking about making that choice. The elephant in the room, as always, is that ethical animal products have a higher price tag at the store. But for me, seeing all the benefits together, including health, makes it a priority I am willing to pay for. What often gets brushed over is the real cost, the tremendous expense, of factory farming. But thanks to TC Farm we have a different option. And their commitment to pasture-raised pork, real value is added to the meat, and our lives.

Discover more about the local meat providers and quality standards found at Lakewinds.

2 responses to “Why Pasture Raised Pork Does a Body Good”